Who is Wisconsin Big Cat Rescue?

Jeff and Jenny Kozlowski established "Wisconsin Big Cat Rescue" in March of 2005. We have been working with big cats for about 9 years, and have had our own since 2002. We are licensed by the and are also a 501(c)3 non-profit organization. 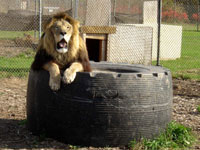 In the beginning, we thought that if you take pictures these animals, it would make a lot of money, which it did for the first two months...we made about $200-$300 per hour. Then, we realized all the stress it causes the animal was too much. So, we stopped the picture taking immediately and started doing some investigating on what actually goes on during this photo business, as well as what happens to the animals . Our findings were disgusting. We contacted rescues around the U.S. and our findings were even worse about the abuse of these animals. It was then decided that our goal in life will be to give what we can and help these majestic creatures as much as we could.

In one year, another big cat rescue turned away hundreds of cats. So, then we started the Wisconsin Big Cat Rescue with the money we had from pictures and donations. We built cages on land donated for the rescue, and we started with six cats and in less than a year. We ended up with 26 big cats... 16 Tigers, 7 Lions, and 3 Leopards. The worst part was that we had to turn over 15 others away. If they did not find a home they were probably euthanized. Our goal now is to give these cats a home where they can live out their life, and not be made to jump through hoops or sit on a table to have pictures taken of them with people at resorts or fairs. Here they can simply run, play, and relax as they please, and receive plenty of love and attention.

We are open to the public and run on "Donations". The does not receive any state, federal, or local funding; it functions entirely on its admission fees, donations, sponsorships, and volunteer work. We invite schools and groups there not just to look at them, but also to learn. We want the public to know that these cats are NOT pets, and could never make good pets. They are not meant to do and are not for people to exploit them to the point where it harms the animal.

These animals were not put in nature to jump through hoops or perform tricks, or to pose for pictures. These cats come from private owners who can't take care them anymore, zoos who think they are no longer beautiful enough to display to the public, and people who use them as to take photos (who later dispose of them when the are no longer small enough to handle, and simply get new cubs). Or just simply animals that need a home.

Our last objective is to get the state of Wisconsin to make some legislation to protect these animals. We are not looking for responsible owners who properly care for their animals to lose their animals, but just to get this state to protect the of these animals, as well as the public. Wisconsin is now one of five states left, that does not have laws regarding the ownership of large cats. Yes, that means that anyone in the state of Wisconsin can legally own one. What does that mean? All the people who have them in others states with legislation and can no longer have them in that move to locations where there is no legislation. The bottom line is, our lives are now dedicated to the big cats, and we will do

whatever we can to save them.

Wisconsin Big Cat Rescue & Educational Center gives these cats a chance at a peaceful and happy life, a chance for the public to learn about them, and protects them from the abuse that they endure elsewhere in captivity. This rescue is good for the community, its families, and the cats, and is federally licensed. Thank you, and I look forward to seeing you at Wisconsin Big Cat Rescue & Educational Center.

A lion's roar can be heard from up to 5 miles away.